Azimo has been awarded the Judges Overall Favourite Award in the 2017 Remittance Innovation Awards (The RemTECH Awards).

The 2017 Remittance Innovation Awards (RemTECH Awards), whose aim is to showcase the most innovative and outstanding ideas, models and projects designed to improve remittance services worldwide were announced at the Global Forum on Remittances, Investment and Development GFRID2017 organized by the International Fund for Agricultural Development (IFAD), the World Bank and the United Nations Department for Economic and Social Affairs (UN-DESA) in New York City at the United Nations Headquarters. 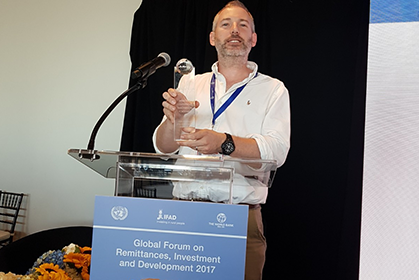 Michael Kent, CEO and Founder of Azimo collected the award, and said “At Azimo we pride ourselves on helping customers better manage their money and are committed to providing a service that is simple and quick to use, so we are delighted to have won the Judges Overall Award in recognition of this”