In early March, Frog Capital hosted a dinner at Kyloe restaurant in the heart of Edinburgh alongside Silicon Valley Bank and MBM Commercial. We were joined by some of the leading entrepreneurs and tech figures in the local ecosystem to break bread and catch up over good food.

Our Senior Partner, Shirin Dehghan led a free-flowing conversation on topics ranging from the funding environment, to hiring, and mental wellbeing. We discussed the stellar successes of Scotland-based tech companies like Skyscanner, and how the next generation hasn’t hit the same heights (yet). The angel community, while incredibly supportive and helpful, have encouraged companies to focus on profitability and exiting sooner rather than later. There needs to be a shift in mindset to build category leaders, which is an area where Frog can help.

This led naturally into an engaging discussion around the healthy tension there is sometimes between investors and operators, and how to ensure that interests are always aligned. This sounds like it should be self-evident, but there were cautionary tales from founders in the room when desired outcomes had diverged. The best way to avoid this is to over-communicate to address concerns before they escalate. At Frog, we spend time with management teams ahead of potential investments to ensure our goals are aligned.

One theme that emerged from the conversation was that starting a business in Edinburgh can prove to be a double-edged sword. While the cost of attracting high quality talent is lower than in London, the pool is smaller. This is less of an issue on the ‘developer’ side, with several high-class universities nearby, but the recruitment of Project Managers was a pain felt by most in the room. Ultimately, many companies have chosen to develop that talent from within.

Perhaps most interesting of all, was when the discussion shifted to mental wellbeing and stress. In different guises, it appeared that everyone has been on a journey in trying to learn how to compartmentalise work and separate it from their personal life. The strains that the ups and downs of start-up life can take on partners and families are immense. Methods included shutting off emails on a Saturday or Sunday, to the more drastic – not discussing work at home at all.

Finally, we’d like to thank Damian and Richard from Silicon Valley Bank, and Stuart and Tracey from MBM Commercial for their support in putting this fantastic evening together, and we look forward to the next one! 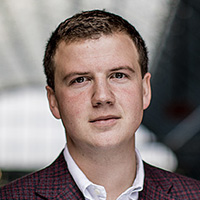 Conor has experience in both early stage investing and mid-market technology M&A advisory. Conor joined us from Forward Partners, an early stage, eCommerce-focused, VC fund. Previously, he spent 4 years at Arma Partners, where he advised on several high profile European technology transactions, including the sales of Momondo, CarTrawler and Metrologic.