The Founder’s Dilemmas: Anticipating & Avoiding the Pitfalls That Can Sink a Startup, by Noam Wasserman

Most business books provide great insight into one particular story – a retrospective view of what contributed to one person’s successes (and occasionally failures along the way). What is always lacking in this story is the acknowledgement of selection bias: a proper view of successes and failures across a broader dataset that provides a narrative not just written by the winners.

Noam Wasserman is one of the few writers to attempt such a feat in his book The Founder’s Dilemmas, using a dataset of 3,600 startups, nearly 10,000 founders and 20,000 executives.

This dataset comprises US survey results covering the decade of 2000-2010, with the majority of the data coming from technology companies and the remainder from life sciences.

Wasserman outlines a number of early and even pre-startup issues for founders, focusing on the human, social and financial resources required to succeed and the early-stage compromises that can restrict future growth.

Starting a business with friends and family can seem like an ideal way to get an idea off the ground but when the business outgrows those early supporters, it is a tough choice for the founder to either let them go or live with the consequences of an inadequate team. Across a number of studies cited in The Founder’s Dilemma, VCs attribute the major cause of failure as weaknesses in the management team in two thirds of cases, and as one of the top three factors in almost all cases.

Hiring the right people at the right time is widely acknowledged as fundamental for success. But what is equally important is recognising that a founder always needs to find a compromise between what is available and what will ultimately be required later down the line. The interaction of roles, rewards and relationships is complex from the start but if a founder fails to build in flexibility, this can damage the business’s chances of success. The way in which responsibility and equity are distributed amongst the team will have a direct impact on talent strategy. If they are distributed inappropriately, this can even reduce the founder’s ability to subsequently attract the quality of people required to upgrade the management team. As Wasserman puts it, “it is crucial for founder CEOs not only to diagnose and correct the problems that arise from hiring the wrong person but also to anticipate when a decision that was good at the time may need to be rethought”.

Fundamental to the book is the trade-off between roles and responsibilities and financial rewards.  Wasserman characterises the two extreme approaches to this as Rich (wealth) or King (control). Rich founders are prepared to do what is necessary to create personal wealth, whereas King founders are more focused on maintaining control, even if this clearly has a negative impact on value creation.

Rich versus King dilemmas will surface in how the organisation changes as it matures, bringing the need for greater decentralisation and specialist skills. To attract the best hires, founders have to give up not only enough cash compensation and equity ownership, but also some level of control over operational decisions, as “skilled people usually don’t like to be told what to do”.

The most critical inflection points for a business that highlight the Rich versus King dichotomy are fund raising and founder succession. Wasserman’s data suggests that C rounds are the inflection point after which more than half of the equity will be owned by VCs. This tightening of equity available for founders and management will also drive tough decisions around its distribution. At this stage, founders will need to assess the performance of key executives. They should determine who is currently making a valuable contribution but going unrewarded and who has been disproportionately rewarded for contributions made earlier on.

On succession strategy, Wasserman’s data shows that where the founder has the self-awareness to initiate succession they retain a board position 75% of the time. By contrast, with a board-led process, the founder remains on the board only 50% of the time; most successions (62%) are board-led processes. Clearly understanding the Rich versus King positioning in advance of these conversations is essential to a successful outcome. Often an interim solution is required as the transition is difficult, and the first successor might fail and need to be replaced. In Wasserman’s words, “boards and founders should see founder succession not as an event but as a process”, requiring coaching and agreement on new skills that will be needed prior to this replacement.

Wasserman concludes that founders will continually face a trade-off between acquiring the resources they require to succeed and the ownership and control they need to cede to obtain them. The data suggests that an 80-100% premium in company value can be gained by those who are prepared to give up their CEO position and board control over those who retained both. Interestingly, another conclusion is that founders should be honest with themselves. What proves to be the most damaging for the business is when control seeking founders temporarily act like wealth seekers before reverting to control. The best outcomes are obtained where founders consistently act in line with their core motivation. It will improve founder-investor relationships enormously if this core motivation is recognised and accepted at the beginning of the journey.

Since the publication of The Founder’s Dilemma, Wasserman has updated his conclusions. In a 2017 academic paper, using data covering the period up to the end of 2012, he states that as a startup grows, founders who retain too much control and decision-making power over their startup can harm its value. Both qualitative case studies and quantitative analyses of more than 6,000 private companies highlight that startups in which the founder has maintained control – by retaining a majority of the board of directors and/or by remaining as CEO – have obtained significantly lower valuations than those where the founder has relinquished control.

In both these later findings and The Founder’s Dilemmas, Wasserman shows that self-awareness and flexibility are key to scaling a startup successfully. Obtaining the human, social and financial resources required to drive value creation requires a trade off against control, especially for first time founders who start from a lower base for all three resources.  Knowing when to lead and when to step back are crucial in terms of talent attraction and retention. Founders accepting that there will be a time to let go is likely to maximise the potential for long term value creation. 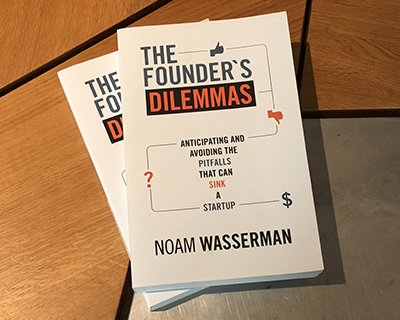